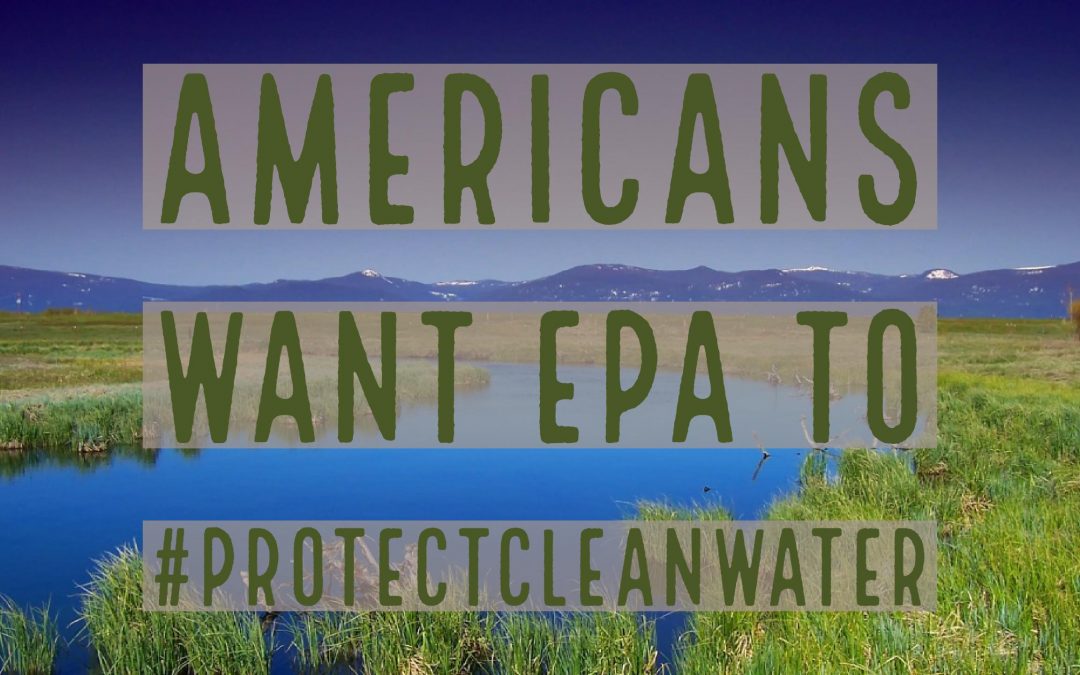 By Rosemary Enobakhare, Clean Water for All Coalition Director

It seems that we are getting more and more divided by the day. It is getting harder and harder to open Twitter or read the paper.

But when you look deeper, past the latest tweets or the headline of the day, you start to find a lot of agreement. Take drinking water, for example. Poll after poll, year after year, shows that, Americans from across the political spectrum are concerned about our water. These polls show that we expect our elected officials and government agencies to protect drinking water and our other vital water resources. This cuts across the political divide. It doesn’t matter who you voted for — clean water matters.

Except, maybe, to some members of Congress.

Ever since the Obama Administration finalized protections for streams, wetlands, and the drinking water sources for more than 1 in 3 people, too many members of Congress have tried to repeal or weaken these vital protections. They have put the needs of corporate polluters before the priorities of their constituents. They have tried to sneak amendments onto must-pass bills to fund the government. They have tried to use an obscure law called the Congressional Review Act to gut these safeguards. They have tried to cut the Environmental Protection Agency’s budget so it can’t do its work to protect our water. We have beat them back each time.

We need to do it again.

Why? Because, despite Scott Pruitt’s scheme to roll back the Clean Water Rule, Congress is back with not one, not two, but four ‘dirty water’ riders to repeal these protections attached to different bills. The Environmental Protection Agency can repeal the Clean Water Rule if it wants to — it just has to justify its action with a strong scientific foundation and ground it in the law. The agency then has to accept public comment on the repeal. But EPA knows that people overwhelmingly support the Clean Water Rule and will oppose any repeal. Therefore, following the legal process would leave the repeal vulnerable to a court challenge. Some members of Congress are trying to do Pruitt’s dirty work for him, instead.

There is a lot at stake. Too many communities throughout the country already have trouble accessing safe drinking water. The last thing we need to do is potentially expose even more people to unsafe water by giving polluters a free pass for activities that potentially put streams, wetlands, and drinking water in jeopardy. But that is exactly what repealing the Clean Water Rule could do. We can’t afford that. Wetlands are essential parts of our water infrastructure, filtering groundwater and protecting communities from flooding. We’re losing them at an alarming rate. This extreme legislation will result in a free pass for activities that damage or destroy wetlands across the country, pollute drinking water and increasing flooding risks.

The bottom line is this: you’re either for clean water or you’re not. You stand with people across the country to safeguard drinking water sources or you want to protect the profits of special interests and corporate polluters. We’re going to learn a lot about who Congress thinks they work for with these votes.