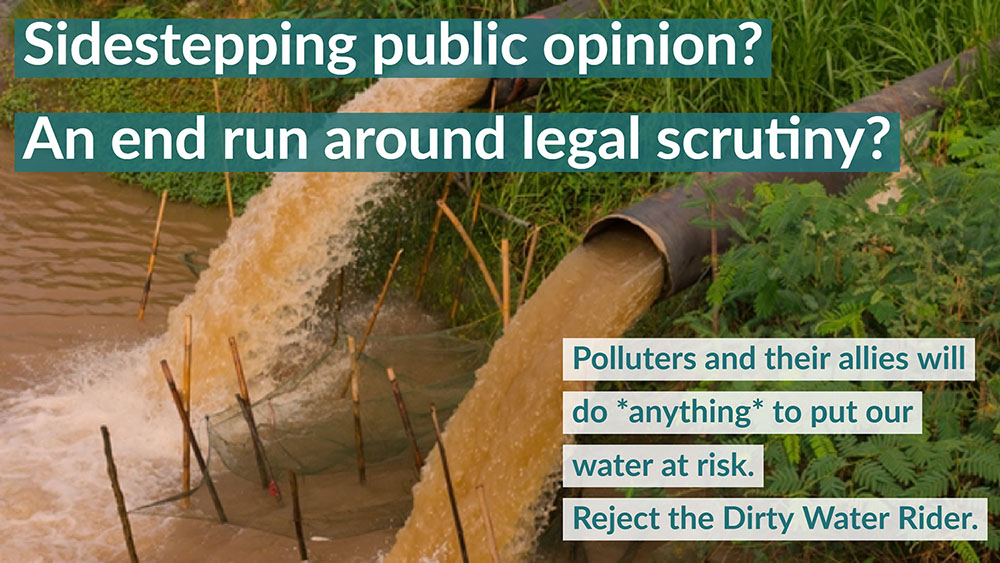 RE: Over 115 groups oppose attacks on clean water safeguards in spending legislation for FY18

Our organizations, along with our millions of members and supporters, urge you to oppose the inclusions of damaging ideological riders in any final spending legislation for Fiscal Year 2018, including those that attack much needed clean water protections.

In particular, three damaging policy riders that assault important water safeguards were included in the Department of the Interior, Environment, and Related Agencies appropriations bill that the Senate Appropriations Committee released in November of last year. These include:

Section 434 is especially radical. This provision aims to shield the EPA and Army Corps of Engineers’ repeal of the Clean Water Rule, which provides protections for the sources of drinking water of 117 million people, from public and legal scrutiny. This rider attempts to cut out the public’s ability to have a voice in the actions of their government and prevent court challenges to the Trump administration’s plan to allow polluters to dump into our waterways. If enacted, this rider would encourage the agencies to ignore Clean Water Act and Administrative Procedure Act requirements that they meaningfully consider public comment. It could also interfere with the court’s’ ability to review if the repeal is “arbitrary or capricious.”

It is hard to imagine a more undemocratic provision, especially when you consider that the Clean Water Rule was adopted after years of scientific research and public engagement. The water bodies at the center of the Clean Water Rule serve critical functions, including protecting the drinking water sources of one in three Americans, protecting essential fish and wildlife habitat necessary for a robust outdoor recreation economy, and providing critical ecosystem services such as water storage that can aid in protecting communities from flooding and drought.

Additionally, the rider would create significant uncertainty around implementation, compliance, and enforcement of the Clean Water Act itself. It would allow the EPA and Army Corps to withdraw safeguards for waterways that clearly deserve to be protected from pollution, such as tributary streams, and leave many of them in a state of limbo. This would put our precious water bodies at risk of uncontrolled pollution, jeopardizing the clean water our children and grandchildren drink from and swim and play in.

Lastly, Section 434 could allow for numerous activities outside of the law from our governmental agencies by exempting the repeal from “any provision of statute or regulation that establishes a requirement for such withdrawal.” Taken at face value, this sweeping language could even allow the agencies to violate anti-corruption laws while withdrawing the Clean Water Rule.

Ultimately, this rider shows that the Trump administration’s allies in Congress recognize that the administration’s scheme to get rid of the Clean Water Rule and the drinking water protections it provides are unlawful.

In conclusion, we urge you to reject all policy riders attacking safeguards for the streams, wetlands, lakes, rivers, and other waters that our families, communities, and economy depend on, as well as broader attacks on our environment and public health. We want to reiterate our disappointment at seeing such politically-motivated attacks on important clean water safeguards in the underlying appropriations bill and urge you to remove these and all damaging, ideological provisions from any final spending legislation for Fiscal Year 2018.

Thank you for your consideration.