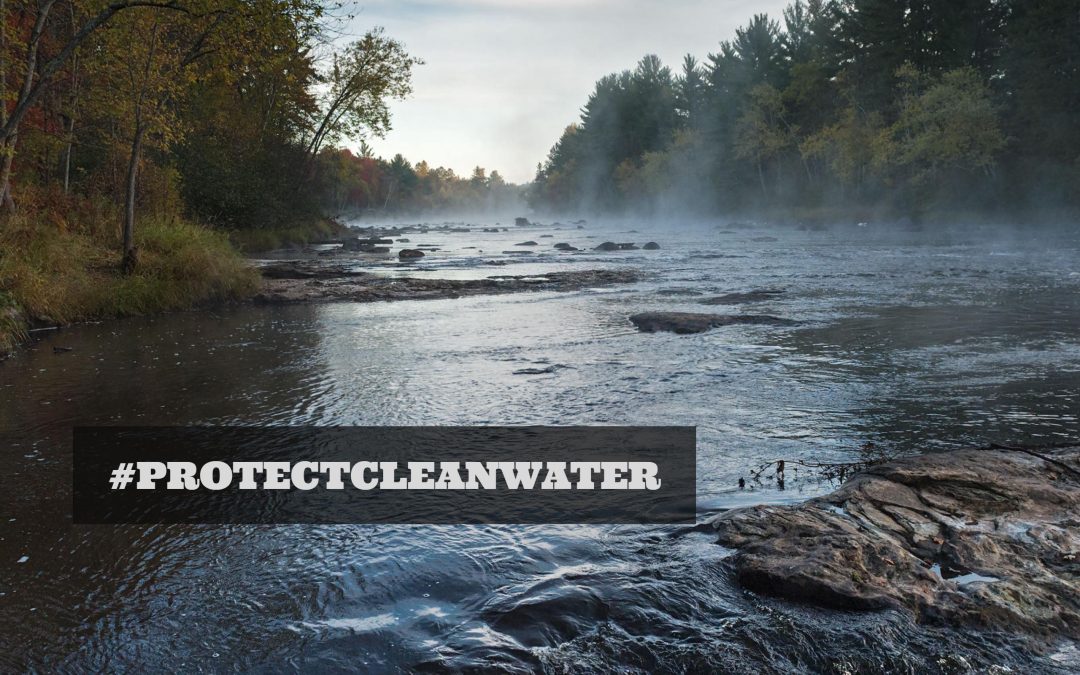 June 9, 2021 – Today, the EPA announced that they will begin the process of repealing the Trump administration’s Dirty Water Rule. Although we agree the unlawful rule should be repealed, today’s announcement leaves our nation’s waters in jeopardy. Every day the Dirty Water Rule is allowed to stay in effect threatens the health of our waterways and the communities that rely on them.

President Biden has demonstrated a commitment to deliver clean drinking water to all, combat the climate crisis, protect our country’s waterways, and fight for racial equity and justice. This vision cannot happen while the Trump administration’s Dirty Water Rule remains in place. The Dirty Water Rule is already harming our waters and communities, and threatens the drinking water of tens of millions of people while giving corporate polluters a free pass to contaminate our wetlands and streams. The Biden administration should act now to repeal the Dirty Water Rule for the sake of our communities, health, and outdoors.

We urge EPA to repeal the Dirty Water Rule as quickly as possible and ensure that their next rulemaking includes a durable definition of ‘Waters of the United States’. Further federal agency action is needed for a robust stakeholder engagement process that prioritizes stakeholders whose health, economic livelihood, and quality of life are linked to clean water; is grounded in the scientific evidence of waters’ functions, the consequences of different regulatory approaches on public health and natural resources, and Congress’s intent in adopting the Clean Water Act.

See below for comments from Clean Water for All Members on the announcement. Please click on the links for more detailed statements.

“Decades of environmental racism have left native and land based communities here in New Mexico feeling the impacts of water pollution for too long. The Dirty Water Rule has only exacerbated the disparity. By quickly repealing this harmful rollback of the Clean Water Act, the Biden administration can finally tackle the nation’s clean water crises and ensure that clean water for all is the standard,” said Rachel Conn, projects director of Amigos Bravos.

“We are thrilled by EPA’s decision to repeal the Trump administration’s Dirty Water Rule. The Clean Water Act, the landmark legislation that has played a pivotal role in the cleanup of waterways throughout the country, is only as strong as the definition of which waterways are included as ‘navigable waters.’ To meet our clean water goals in the Chesapeake Bay watershed, the Clean Water Act needs to protect all waterways including headwater streams, critical wetlands, and vernal pools. These waterways all feed into the Chesapeake Bay and are a crucial part of restoration efforts. They also perform critical ecological functions and provide numerous economic benefits. With pollution and climate change threatening clean water, we need to fulfill the promise of the Clean Water Act by protecting the millions of miles of streams, millions of acres of wetlands, and countless other water bodies that are currently unprotected under the Dirty Water Rule. We urge the EPA to not only carry forward with their effort to repeal the Dirty Water Rule, but to also replace it with a strong, enduring definition that will protect all waterways. Our responsibility to leave a legacy of clean water to future generations is at stake.” – Mariah Davis, Acting Director, Choose Clean Water Coalition

“It’s good that EPA announced a plan to develop a new Waters of the U.S. policy to clarify Clean Water Act protections for critical water resources, but we also need action to protect our water right now. The previous administration’s so-called “Navigable Waters Protection Rule” stripped protections from far too many streams, wetlands, and drinking water sources. These waters, and the communities that rely on them, are at risk today. EPA can protect these waters and communities by repealing this Dirty Water Rule as soon as possible.” – Jennifer Peters, Clean Water Action National Campaigns Director

“By committing to repealing and replacing the Dirty Water Rule, EPA Administrator Michael Regan has taken a vital step for America’s rivers, lakes and bays — and for the drinking water of millions of Americans. To prevent further degradation of our waters, we call on the administration to rescind this Trump-era rule in 90 days or less.” – John Rumpler, Senior Attorney and Clean Water Program Director for Environment America

“Today’s action falls well short of the Biden administration’s commitments to protecting our environment and communities,” said Julian Gonzalez, legislative counsel for Healthy Communities at Earthjustice. “We are urging the EPA to swiftly extend full clean Water Act protections to all the nation’s waters, as they are urgently needed to stop destruction from industry polluters caused by Trump’s Dirty Water Rule. Critical wetlands, rivers, and streams are being destroyed from coast to coast at a rapid rate with the U.S. Army Corp’s aggressive implementation of the Trump Rule.”

“President Biden has demonstrated a commitment to deliver clean drinking water to all, combat the climate crisis, protect our country’s waterways, and fight for racial equity and justice. This vision cannot happen while the Trump administration’s Dirty Water Rule remains in place. Latinos are disproportionately hurt by polluted and unclean water. The Dirty Water Rule is already harming our waters and communities and threatens the drinking water of tens of millions of people while giving corporate polluters a free pass to contaminate our wetlands and streams. In order to stop the continued harm to our waters, the Biden administration must act now to repeal the Dirty Water Rule and restore clean water protections for the sake of the Latino community, all our communities, and our health, and well-being of the outdoors.” – Mariana Del Valle Prieto Cervantes, Water Equity and Ocean Program Manager, GreenLatinos

“Today’s announcement is a good first step in delivering on President Biden’s commitment to ensuring that everyone has access to clean, safe water, but the administration must move quickly to dismantle the dangerous Dirty Water Rule. Every day this harmful rule is in effect, it endangers the waterways our communities depend on —  that is unacceptable and must stop now. For too long, Black, Brown, Indigenous, and low-income communities have borne the brunt of water pollution while corporate polluters enjoy the profits of lax protections for streams, wetlands, and other waters. We appreciate the agencies’ dedication to establishing a new rule based on science with a transparent and inclusive process, and encourage them to move expeditiously to stop the harm to our communities and the environment from the Dirty Water Rule.” – Madeleine Foote, Deputy Legislative Director, League of Conservation Voters

“The clock is ticking and rivers, lakes and other waterways in our national parks and across the country will continue to face increased pollution and other damage until EPA and the Army Corps get rid of the so-called Navigable Waters Protection Rule and adopt new and stronger safeguards. Humans need clean, safe water. It is also key to the health of our park waterways to provide critical wildlife habitat and safe recreation for millions of people each year, who visit to see alligators in the Everglades, fish for trout in the Yellowstone River or kayak along Chesapeake Bay. Today’s announcement is a critical first step in reinstating protections for America’s waterways. But it cannot be the only step. With so many communities living with unsafe drinking water, the administration must act now, to restore and strengthen protections.” – Theresa Pierno, President and CEO, National Parks Conservation Association

“This is a positive step toward restoring the level of clean water protections that the science and the law demand, but we are concerned that the Administration is not acting quickly enough to protect the drinking water of millions of Americans,” said Jim Murphy, director of legal advocacy for the National Wildlife Federation. “Time is of the essence: The Army Corps of Engineers has already ruled that thousands of waters are not eligible for protection under the Clean Water Act — effectively allowing them to be polluted or destroyed outright under federal law. The Administration has all it needs right now to repeal the illegal 2020 rule and we encourage them to get started.”

“Every day the ‘Dirty Water Rule’ stays in effect, America’s waterways remain at risk. The Biden Administration’s planned proposal to repeal the rule is a step in the right direction, but lacks the urgency required to restore full legal protections for the lakes and rivers that supply drinking water to millions of people.” – Jon Devine, Director of Federal Water Policy for Natural Resources Defense Council

“With our nation’s waters under siege from polluters, the Biden Administration must overturn Trump’s irresponsible rollback as soon as possible,” said Heather Govern, Director of Conservation Law Foundation’s Clean Air and Water Program. “It is imperative that government agencies then move quickly to redefine ‘Waters of the Unites States’ to ensure clean water for current and future generations.”

“We welcome the Biden administration’s commitment to protecting clean water and the communities that rely on healthy watersheds – a commitment needed now more than ever,” said Sean Dixon, Executive Director at Puget Soundkeeper. “Puget Soundkeeper will continue to fight for clean water, will engage in this new process with our watershed-wide partners, and will hold the administration to task as needed.”

“No administration can allow the interests of industrial polluters to trump the sole objective of the Clean Water Act: to restore and maintain the integrity of our nation’s waters, so that they are safe for fishing, swimming, and as sources of drinking water for our families and communities,” said Kelly Moser, senior attorney and leader of the Southern Environmental Law Center’s Clean Water Defense Initiative. “The Biden administration must act quickly to restore clean water protections because the current rule lets developers, industry, or anyone else pollute, fill, or pave over these waters without federal permit. Every day the rule remains in place means that more streams, wetlands, lakes, and drinking water sources—protected under every other administration—can be destroyed. The administration must make this a priority, and we will hold their feet to the fire.”

“Degraded and polluted water systems upstream lead to water quality problems at the beach, and can cause severe economic harm to our coastal communities. We must have science-based rules in place to protect our nation’s waters, both at the beach and at inland streams and rivers. The Surfrider Foundation applauds the EPA for starting the process to revoke the Dirty Water Rule and encourages the reinstatement of strong protections as soon as possible.” – Katie Day, Environmental Science and Policy Manager, Surfrider Foundation

“These small headwaters constitute more than half the nation’s stream miles, and are the capillaries of the nation’s aquatic systems,” said Chris Wood, president and CEO of Trout Unlimited. “They provide seasonal habitat for fish and wildlife, and protect water quality downstream. The 2020 rule left streams and fisheries across the country unprotected. We applaud EPA Administrator Regan for taking action to safeguard clean water.”

“While we applaud the agencies’ decision to revise the definition and appreciate the agencies recognition of the severe damage caused by the elimination of clean water protections for our nation’s waters, it is imperative that the agencies take urgent action to immediately repeal the current rule because the damage is continuing and expanding every day it remains in place,” said Kelly Hunter Foster, Waterkeeper Alliance Senior Attorney. “Waterkeeper Alliance is committed to continuing our fight to ensure that all of the nation’s waters are protected from dangerous pollution discharges and destruction.”