Clean Water for All Rallies to Protect Our Waters at the Supreme Court! 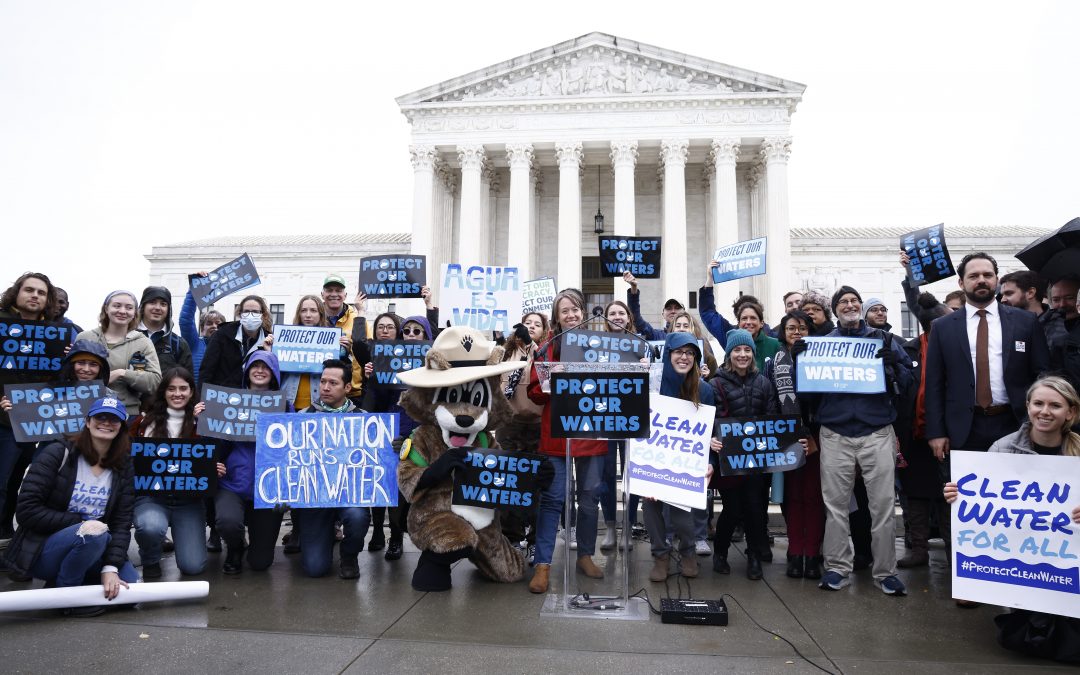 Congress unanimously passed the transformative Clean Water Act 50 years ago. Their aim was to restore, replenish, and maintain the integrity of our waters. However, as we celebrate the 50-year anniversary of this groundbreaking law, the Supreme Court heard oral arguments for a case, Sackett v. EPA, that may threaten certain Clean Water Act protections. The Sackett couple, who brought forward the case and are represented by Pacific Legal Foundation, owns wetland property that they have attempted to fill in multiple times over the past 18 years, but have been struck down every time by the EPA. The EPA has mandated that the Sacketts must restore their wetlands as the waters flow from their property into Priest Lake’s waters: a major source of drinking water in Idaho. In this case, the Sacketts argued that the Clean Water Act’s verbiage does not allow the EPA to enforce protections on wetlands or streams that do not flow year-round. If these protections—protections that have been in place for 50 years—are stripped, the drinking water supply of one in three Americans would be threatened.

On October 3rd, the day of the oral arguments for this case, the Clean Water for All Coalition declared it the National Day of Action to Protect our Waters: orchestrating social media takeovers, press events, and a rally outside the Supreme Court. This rally occurred while the Justices heard oral arguments in the case, and featured clean water stakeholders from across the country, including Earthjustice, Children’s Environmental Health Network, Black Millennials 4 Flint, GreenLatinos, and Sierra Club. From the event outside of the Supreme Court to all those who made their voices heard online, it is clear that there is strong public support for clean water. The speakers advocated for the Supreme Court to maintain the EPA’s right to protect wetlands and streams, while highlighting the importance of a clean water system and emphasizing that water is life, itself.

Tom Kiernan, President and CEO of American Rivers warned: “If this court slashes our clean water safeguards, countless streams and wetlands all over the country will no longer be protected. This means that polluters will be given free rein to use our nations waters as sewers once more.”

According to a Morning Consult poll for the Walton Family Foundation, four in five adults “want the EPA to continue taking the lead to protect clean water.” Nearly nine in ten voters agree that access to safe, affordable water is a human right, and “at least seven-in-ten adults nationally have a favorable opinion of the Clean Water Act (CWA).” This demonstrates that this issue is a bipartisan one: the vast majority of people across the country believe that a strong Clean Water Act is vital to protecting our nations waters. As we commemorate the 50th anniversary of the Clean Water Act this year, we must continue to show this strong public support and demand that our leaders protect our waters.